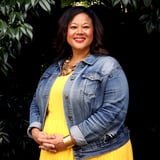 While chatting with New York Times-bestselling author Jasmine Guillory about her latest novel, the recent big-screen rom-com “The Lost City” comes up. In the film, Sandra Bullock’s character is a successful romance novelist but harbors some resentment toward the genre in which she’s built her career. She diminishes her dedicated readers with stereotypes, only to be reminded by her cover model, played by Channing Tatum, “Don’t minimize the people that love your work by calling it schluck; that’s not fair to them. . . . I thought you of all people would know to not judge a book by its cover.” When we chatted, I’d recently watched the movie (though Guillory hadn’t yet streamed it), and the moment struck me, as a fan of romance and someone who has long hated when contemporary literature is likened to chick lit. I wondered to Guillory how she as an author tackles those stigmas.

“It’s frustrating to me, because it feels like it’s so based in misogyny,” Guillory tells POPSUGAR. “You think there’s something wrong with writing romance, because they’re books that women like? That just feels like that’s it. Right?” Guillory rejects the notion that a happy ending is “unrealistic.” She elaborates, “I know lots of happily married people. It’s not like they are together and then nothing ever goes wrong in life. That’s not what the happy ending means. But they are together and happy together. . . . I think it is great and fun to explore relationships like that. There’s so much in romance that is about people dealing with hard things, but dealing with them together. And I think that’s one of the things that I really love about writing romance.”

“There’s so much in romance that is about people dealing with hard things, but dealing with them together. And I think that’s one of the things that I really love about writing romance.”

Ultimately, the author of “The Proposal” says, “I do not understand all the people who look down on it. Why look down on something that brings people joy?”

And joy is exactly what Guillory’s latest novel, “Drunk on Love,” brings. The contemporary romance – released on Sept. 20 – takes readers to California’s Napa Valley, specifically a Black-owned, family winery. Margot Noble and her brother Elliott operate the vineyard, though their relationship is strained. Letting loose in a rare moment, the ever-focused Margot has a one-night stand with Luke Williams – only to find out he’s the winery’s newest employee. “They have to deal with their new relationship as employer and employee and try to ignore all of the feelings that they’ve had from the night before and that grow throughout the course of the book,” Guillory teases.

So what comes first for Guillory when crafting a new story? It’s not always the same (chicken then egg or egg then chicken) answer – though an outline is involved. And she’s usually prepped with a setting. This time, Napa spoke to her. She doesn’t live too far from the popular travel destination, but other than being a vineyard tourist, she had to do research on what goes into operating one. “I started first of all asking a lot more questions whenever I went to a winery, asking all the people how long they’ve worked there, what they do, what their job really entails,” she explains. “And then I talked to a few people who run wineries, to find out more stuff about the background.”

With her setting in place, she also knew immediately that Luke would be a Napa native, and one who – like many during the pandemic and amid a recent trend dubbed quiet quitting – is grappling with his future after leaving an unfulfilling career. “I realized that it was about quitting his job, but then being not sure if he’d made the right decision,” she explains. “If this was what he was always supposed to do, why had he given this up? Was he disappointing people? Was he disappointed in himself? And what did he really want in life? And I think that’s something that a lot of people explore, especially in the age group that Luke is in, his late 20s, early 30s.”

She elaborates, “I think a lot of people have hit that point in life where they’re like, ‘Wait, do I want what I had planned to do? Or was that just something I had stuck in my mind years ago, or that my parents wanted for me?'”

As with all of Guillory’s works, Luke and Margot’s Black identities are also integral to the plot and their development. For Luke, that was exploring how, as “a person of color, a man of color, a Black man who had been in tech and sort the guy who made it good,” he deals with feeling like he’s let people down by walking away from a high-profile career to an hourly role at Margot’s winery.

“My books all star Black people,” Guillory says. “I want them to feel like these are real people and are in situations that actually happen.”

And that reality she embeds in her works is having an impact. Guillory recalls a moment at a fall 2019 book signing when a woman told her, “I just want you to know, I read your books during a really hard time. And they really helped get me through.” Both Guillory and the fan ended up tearing up, with the former saying the interaction “meant so much to me.”

“Books have gotten me through some really hard times in life, and so it means so much to me that my books could do that for anyone else.”

“Drunk on Love” is available to purchase now.