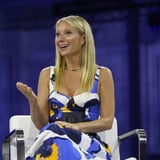 Gwyneth Paltrow is taking time to reflect on her past in a new essay in honor of her 50th birthday. In a post shared on her Goop blog on Sept. 22, the 49-year-old actor reflected on the passage of time and contemplated mistakes she’s made throughout her life.

“My errors, which live in the shadows, slippery and dark, are harder to define. Not because I don’t know what they are, but because we keep them hidden, out of the logbooks,” she wrote. “I have hurt people, never intentionally, but I have done so just the same. I have let people down by not being who they needed me to be. I have betrayed myself to keep the peace. I have crossed lines, the thoughts of which sometimes rip me from sleep and suspend me into the hollowness of shame for a long, dark night.”

In spite of all of that, she continued, her biggest regret is staying silent instead of speaking out. “Most regretfully, and so often, I have not spoken my truth to spare some perceived consequence, that hurting someone will tear us both apart. My most lasting mistakes and the mess that comes with them have all stemmed from me not standing fully in my truth and speaking from it, come what may,” she wrote. “Saying the words that could have spared seasons of heartache and repercussions. No. This does not feel right to me. Your expectations are not appropriate. Your behavior is not appropriate. This relationship is no longer right for me. This project is not right for me. You are no longer right for me.”

She added that she’s working towards accepting her flaws. “I would like to fully acknowledge myself. I am imperfect, I can shut down and turn to ice, I have no patience, I swear at other drivers, I don’t close my closet doors, I lie when I don’t want to hurt feelings,” she wrote. But in the end, she continued, she hopes that “my feelings of regret and my mistakes can act as scaffolding for what I build from now on. That they are the greatest accomplishment of my life.”

Paltrow turns 50 on Sept. 27. The Goop founder and actor shares two children, 18-year-old Apple and 16-year-old Moses, with her ex Chris Martin. She ended the essay by reflecting on her kids, who are “now old enough to remember this ‘big’ birthday of mine into their own adulthoods.”

At the end of the day, she concluded, “I really won’t know what it was like to turn 50 until much later, when I can reflect back from a higher perch, perhaps at one of their 50ths, hearts full and broken simultaneously (as that is life).”

Gwyneth Paltrow’s Most Precious Pictures With Her Kids