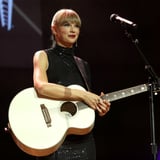 Remain calm, Swifties: the walk-up to Blondie’s upcoming album “Midnights” continues to ramp up. At midnight on Sept. 21 – one month before the album’s Oct. 21 release – Taylor Swift released the first track name from “Midnights” via TikTok after the social platform teased the big announcement earlier in the day, thus beginning a new fun social media game show.

In the initial video – accompanied by elevator-like music – Swift tells fans: “It’s me. Hi, I know that I have a habit of dropping cryptic clues and Easter eggs when giving you information about new music, and I am not here to deny that, but I’m here to defy that. Welcome to a new series I’m calling ‘Midnights Mayhem With Me.’ I’m going to be using this technologically-advanced device to help me allow fate to decide exactly what track titles I’m going to be announcing and in what order.”

The device in question? A spinning drum, from which she plucks out one of 13 balls. The first? “Track 13, because of course. Track 13 is called ‘Mastermind.'”

She followed up the initial “Midnights Mayhem” with a second TikTok clip on Sept. 23. The “second episode” featured, again, the spinning ball drum and a “special guest”: Swift’s cat Meredith. The track she revealed is track eight, which she said is called “Vigilante Sh*t.”

Swift announced “Midnights” during the 2022 VMAs in August, sharing full details in an Instagram post at midnight on Aug. 29. Alongside the album-title news, she revealed the cover art: a photo of the singer with heavy blue eye makeup and holding a lighter. She also included a second image with the following text: “We lie awake in love and in fear, in turmoil and in tears. We stare at walls and drink until they speak back. We twist in our self-made cages and pray that we aren’t – right this minute – about to make some fateful life-altering mistake. This is a collection of music written in the middle of the night, a journey through terrors and sweet dreams. The floors we pace and the demons we face. For all of us who have tossed and turned and decided to keep the lanterns lit and go searching – hoping that just maybe, when the clock strikes twelve . . . we’ll meet ourselves.”

“Midnights,” which reteams Swift with a frequent collaborator, producer Jack Antonoff, is already available to preorder and presave.