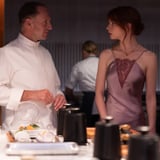 Anya Taylor-Joy and Nicholas Hoult pay the price for the culinary experience of a lifetime in their new thriller, “The Menu.” The film, produced by Searchlight Pictures, stars Hoult and Taylor-Joy as Tyler and Margot, a young couple who visit a remote island for the opportunity to eat at Hawthorne, an exclusive restaurant headed by celebrity Chef Slowik (Ralph Fiennes).

What begins as a night of culinary exploration planned by one of the most renowned chefs in the world slowly dissolves into a nightmarish series of mind games intended to give the diners a fully immersive dining experience. “The game is trying to guess what the overarching theme of the entire meal is going to be,” Tyler says in the trailer released on Aug. 10. “You won’t know till the end.” For Tyler, a foodie, the evening is an opportunity to indulge his palate. For Margot, who reluctantly tags along, it’s a mystery waiting to be solved, if she can make it to the final course.

“This guest list, this entire evening, has been painstakingly planned,” Chef Slowik tells the 12 VIP dinner attendees in the clip. As an ominous chorus of “yes, chef!” echoes throughout the restaurant, the camera jumps between clips of a man in feathered angel wings being lowered into a lake, a gunshot ringing through the dining area, and guests running for their lives through the nearby woods in a Hunger Games-style fight for survival. While Margot rightfully asks, “What the hell is going on?,” Chef Slowik assures the diners that “it’s all part of the menu.”

Taylor-Joy and Hoult take the lead roles as Margot and Tyler, respectively. Harry Potter and “No Time to Die” star Fiennes plays opposite the pair as Chef Slowik, the mastermind behind the evening’s chilling events. Additional cast members include Janet McTeer as Lillian Bloom, Judith Light as Anne, Hong Chau as Elsa, John Leguizamo as a movie star, Rob Yang as Bryce, Aimee Carrero as Felicity, Mark St. Cyr as Dave, Arturo Castro as Soren, Paul Adelstein as Lillian’s editor, Reed Birney as Richard, Christina Brucato as Katherine, Adam Aalderks as Jeremy Loucks, Rebecca Koon as Linda, Peter Grosz as a sommelier, Rachel Trautmann as a chef, and Mel Fair as the boatman who carries Margot and Tyler to their culinary doom.

The film is directed by Mark Mylod, whose past works include “Entourage,” “Once Upon a Time,” a stint as guest director on two episodes of “Game of Thrones,” and “Succession,” which he also executive produces.

“The Menu” will premiere at the Toronto International Film Festival in September and hit theaters on Nov. 18.

The production company released the teaser trailer for “The Menu” on June 11, setting the scene for an extravagant dinner date filled with gory surprises. Golden scissors stabbed through a perfectly seared steak and giant marshmallows roasted over a cultish pit of cocoa powder are just some troubling hints that this culinary experience is about to be anything but ordinary. See the full trailer for “The Menu” ahead.