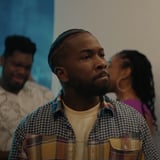 An up-and-coming actor’s world comes crashing down in ALLBLK’s “Send Help,” but the half-hour dramedy is about to be your new favorite show. Created by “Insecure” alum Jean Elie and Mike Gauyo, “Send Help” follows first-generation Haitian American Hollywood star Fritz Jean-Baptiste (Elie), who thinks he’s the next big thing after landing a role on a fictional TV show titled “This Can’t Be Us.” However, in this exclusive look at “Send Help”‘s premiere episode, Fritz is in for a rude awakening when a shocking video threatens his future.

“Did you see the video?” a reporter from The Shade Room asks Elie’s Fritz as he watches a clip of someone saying “Chill, I have a Black therapist” before repeating some very colorful language. Of course, Fritz acts clueless, but the reporter is sure he’s seen the video that could potentially shut down his TV series. Fritz tries to get her to kill her story, but she clearly has other plans. “It’s too good, baby. And Black Twitter is going to eat this up.”

Seems Fritz’s “sis” won’t be able to save him from an impending scandal, but will he still find a way to dodge this bullet? That question can only be answered by tuning into “Send Help” when it premieres on Aug. 11. Elie tells POPSUGAR that “Send Help” is largely inspired by his own life story and intends to “demystify” people’s perceptions about Hollywood.

“Send Help” streams new episodes on Thursdays only on ALLBLK. Check out the show’s trailer ahead.