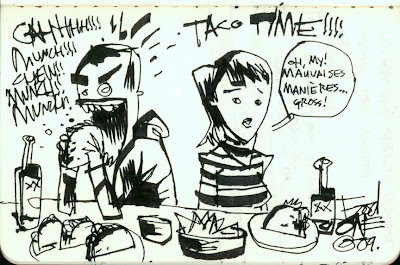 Z-Ro and um, A-Ro, go in over Drake’s only good song because well, this rap-sing schtick’s been Z-Ro’s forever now. Not sure, but I suspect it bugged ‘Ro and company when Drake rapped over “June 27th” and in some weird, smart way, this is the “response” record. Please note how Z-Ro’s freestyles (and even A-Ro’s in a way) are just as effortless and meaningless as Drake’s but they work–nothing contrived, a guy going off the dome, wandering around the same topics (drugs, money, blowjobs, how fucking fake everybody is) because it’s what was on his mind the day he recorded this, which was pretty much like every other day in the life of Z-Ro. The screwed version of the little bit ignored Relvis Presley tape came out before the regular version, which is genius because it’s much better screwed–or “slowed” as it’s listed–and it’s the only way anyone would really give that version a proper listen.

The decade in mainstream but completely insane rap can be told through these three guys. So here they all are, the freaky-freak trap rap triumvirate rapping over a big, horrifying beat from Bangaladesh. Gucci waddling around the beat and locking-in like he does on damn near everything, and tossing in some genuinely mature insight (“Someone dissed me yesterday, what I supposed to do now, cry?”) and a depressing hook. Then, it’s over to Wayne who raps like he cares again which means enunciating in a way we haven’t heard since he spoke to Miss Katie Couric and being all meter-obsessed, threatening to shoot your grandpa, and cackling a whole bunch. Cam’ron’s still not quite there, but you still get something like “all the haters hate me” and that line about using your wifey for food-stamps.

-DJ Quicksilva “Where They Do That At”

This song’s been out for a minute, and by “a minute” I mean since the summer, but there’s been recent Baltimore and “DMV” remixes of this supposed-to-be-fleeting party song from DJ Quicksilva of DC’s WKYS 93.9 and now it has a video too. The sub-regional remixes add rapping and a seriousness that the “Where They Do That At” totally doesn’t need (though it is a good primer on Baltimore/DC rappers) so this original version stays winning for just following in the tradition of something like “Lookin’ Boy” or Chalie Boy’s “I Look Good”. Like the former, it’s full of edifying, hilarious observations (these songs are the closest we have to 60s/70s “party records”), and like the latter, it’s just a kind of visceral, post-snap synth track with a hook fun enough to repeat for months and months. Mainly though, it’s just a goofy, fun song that at it’s heart calls for people to be reasonable.

-Nite Funk “Am I Gonna Make It”

On Stones Throw, remixing Animal Collective, collaborating with Nite Jewel…thing is, Dam Funk’s music is just too good to be bogged-down by schtick or contained by potential niche audiences. Save for the brilliantly subtle female vocals (as coy and quiet as Dam’s are loud and confident in their lack of confidence), it’s hard to tell exactly what Nite Jewel brought to the song, but it seems like it’s probably the dying-battery electronics and atmospherics that give “Am I Gonna Make It” that one more layer of sadness that it really needs. Unlike most Dam Funk songs, which are either blissed-out instrumentals or heart-on-the-sleeve love songs, “Am I Gonna Make It” is self-reflective and self-loathing, a song about being on one’s way to some kind of epiphany–having fucked-up and well aware of it, but only like 70 percent ready to accept it.

“Black Christmas” is from that weird, transitive era between 50s Liberalism and Black Power-informed Civil Rights. It quietly demands equality but wraps it around the Christmas holiday and still has that “we’re gonna make it” power that all good soul has. Crime and poverty are invoked but instead, the joy that nevertheless exists is the song’s focus. A few years later, hip, with-it, blacks and whites wouldn’t dig the sentiment or the glowing warmth of the voices and production. It’d just not be political enough–a Christmas song built with the master’s tools if you will. Re-released now, thanks to Strut’s recent In the Christmas Groove compilation, “Black Christmas” is a weird time capsule, a sideways response to the use of kids voices for transcendent twee rather than sincerity in stuff like Where the Wild Things Are, and most importantly, a “new” awesome song for Christmas mixes.

further reading/viewing:
-“Gucci Mane, No Holds Barred” by Jon Caramanica for The New York Times
-DJ Quicksilva’s MySpace
-Video for DJ Quicksilva’s “Where They Do That At”
-“New Singles from Dâm-Funk, Solange, and Simian Mobile Disco” by Michelangelo Matos for The Stranger
-Food One/Jim Mahfood Art